The New Album from Player A, "Sand Dollar In My Suitcase"

Now available! “Sand Dollar In My Suitcase” the new album from Player A of Sambas, Bossa Novas, and music best consumed with a cool drink with an umbrella, has now been released out onto the beaches and shores of the world! Find out more at PlayerAJazz.com or listen below!
Email ThisBlogThis!Share to TwitterShare to FacebookShare to Pinterest

Stayin' Alive (After Midnight), from Player A Jazz (Video)

“Every man lives in two realms: the internal and the external. The internal is that realm of spiritual ends expressed in art, literature, morals, and religion. The external is that complex of devices, techniques, mechanisms, and instrumentalities by means of which we live.” – Martin Luther King, Jr.

Conceived as a follow-up to their 2011 CD Our Own Devices, Player A has added two new songs, and remixed others from that release to present their newest EP, Devices, Techniques, & Mechanisms.

The release begins with a remix of Our Own Devices’ “(Hate to Say) I Told You So”, renamed “Told You So!” and featuring veteran smooth jazz sax man Jeff Kashiwa (Rippingtons, Sax Pack). Kashiwa brings some great sax lines and a funky solo to feature along with Mark Baldwin’s smooth guitar work.

“Jeff was gracious enough to play on this song and really took it to another level. I always felt like this song deserved more featured status, and still hold that it can be a smooth jazz radio hit,” says producer and Player A keyboardist/composer Eric Copeland. “I hope one day to say, ‘Told You So!’”

Next up is a song that was written for Our Own Devices but instead was adopted by smooth jazz guitarist Drew Davidsen (also produced by Copeland on Creative Soul Jazz). Called “Drew’s Blues”, the song was featured on Davidsen’s Spin Cycle release.

But now Baldwin shows his own version of the guitar work, and the groovy track is assisted (as it is on much of the EP) by veteran remixer and Grammy-winner Jeff Savage (Natalie Imbruglia, Toby Mac.)

“Yin & Yang” is another new tune and was scheduled for the 2011 album but wasn’t finished in time. While a fun track, it just wasn’t taking shape in 2011.

“We had cut the unique time signature tune with drums, bass, and keys, but at the time I didn’t have the melody or its personality,” Copeland says. “That all came to me this past year as I started thinking of remixing some of Our Own Devices.”

The next track is a real remix, completely conceived, performed, and remixed by Savage. Remixing smooth jazz? Savage found it interesting, challenging, and ultimately fun! Originally called “Chill” on a 1999 album from Copeland named Cooler, then “Chiller” for Our Own Devices, now called “Chillest (Savage Remix).”

Player A perhaps made its greatest impact in 2011-12 on Smooth Jazz radio with the Top 30 Billboard hit “Coming On”. Here Savage remixes and some new smoother sax parts were found for a new mix of this hit song now called “Coming Back On.”

The EP ends on the song that Our Own Devices started with, “Sleekness Revisited” featuring another great smooth jazz sax man Marcus Anderson. Again with remix elements by Savage, Copeland also feels the saxes are now tighter.

“Some things just bother you after you release an album, and they never go away,” Copeland says. “And this killer tune just had some things I heard in headphones that always needed fixing. That is done now, and the groove is tighter too!”

The funny thing is, Player A was supposed to release a Latin record in 2018 that they have been working on the last six or seven years called Welcome to Florida. But Copeland decided to put that off one more year to realize this new vision for these songs.

“We’ll be moving sideways from Smooth/Acid Jazz to Latin, Bossa, and Samba, but Player A is all about showing different sides of the amazing musicians of Nashville and contemporary jazz. Whatever you hear will be well played, great songs, by great musicians and minds.”

Hear the album at Spotify, Apple Music, iTunes, or visit the Player A site at http://www.PlayerAJazz.com
Email ThisBlogThis!Share to TwitterShare to FacebookShare to Pinterest

Player A Jazz, "The Jazz in Me" 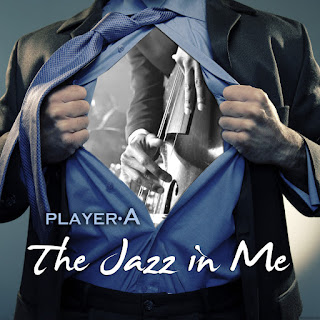 These are songs that Player A recorded originally for the record of the same name by Player A founder and keyboardist Eric Copeland. These songs reflect a more vocal side of the group.
First up is the seminal and somewhat autobiographical “The Jazz in Me” which explores Copeland’s reasons and life through jazz. Then we are treated to the vocals version of “My Steps are Ordered”, which features vocals instead of the bass-led version of “Steppin'” from the group’s release Our Own Devices.
Copeland shares another sliver from his personal life with “In Between Dreams", an island-tinged samba. “When She Returns” is a mysterious ballad that tells the story of a relationship both challenging, and completely wonderful.
Finishing the EP is a unique arrangement and composition of the hymn “Have Thine Own Way” with new verses written before using the hymn for the chorus.
Find out more at http://www.PlayerAJazz.com
Email ThisBlogThis!Share to TwitterShare to FacebookShare to Pinterest
Home
Subscribe to: Posts (Atom)